Oil production in Libya is currently 275 thousand barrels per day. A month ago it was about zero. New barrels on the market put additional pressure in circumstances where demand tends to decline.

Oil prices continue to decline and we see no reason to revise our target at 35.00 Brent. There is still plenty of time before the OPEC technical meeting on the 15th for the market to reach this level.

With oil prices falling, exploration and production are declining. As an example, the Norwegian Equinor is starting to cut staff in the exploration sector as part of a cost-cutting program.

The market has reached an equilibrium position and is in no hurry to get out of it. The quarterly data from the USDA on grain stocks in the US, although they turned out to be worse than expected, could not fundamentally improve the position of bulls in the market.

So, after the upward price jump in the wheat market, there was an immediate pullback downward. This tells us about a large number of sellers who are ready to sell contracts when approaching the level of 600.0 cents per bushel.

Shells from Nagorno-Karabakh have not yet reached the ruble. Since no harsh statements, and most importantly actions, came from the Kremlin, it can be assumed that Russia will refrain from participating in the conflict between Armenia and Azerbaijan. The peace-loving statement of the presidents of Russia, the United States and France calling for an end to the war clearly speaks in favor of finding political ways of a settlement. This approach is perceived positively by the business.

Nevertheless, it is unlikely that the ruble will be able to maintain its current levels amid falling oil prices. We admit a correction to 76.00, but then there will be another attempt to break through to the 85.00 area.

Until Nabiullina panics and does not urgently raise the rate. This cools the hotheads of speculators who are very fond of situations when the Central Bank’s situation is getting out of control. Therefore, we will rather see well-practiced technical moves in a pair, rather than a unidirectional rally. 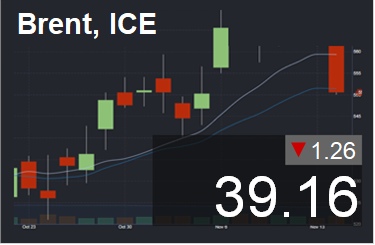 Both buyers and sellers are leaving the market. The fall in investments in the market tells us about the uncertainty of some of the participants, and makes the situation more subtle than it was a week ago.

Growth scenario: October futures, the expiration date is October 30. We continue to refrain from shopping. When we approach 35.00 we will definitely buy. The rest of the levels are of no interest.

Falling scenario: we continue to stand in shorts. On Friday, they showed a new minimum that give the free hands of sellers. On Monday, we expect the bearish pressure to increase.

Fundamental US data: the number of active drilling rigs increased by 6 units to 189 units.

Buyers flee, sellers, on the contrary, come to the market. We see an increase in negative moods. WTI was unable to set a new low on Friday, however, the market is unlikely to postpone this achievement on the back burner. The long red candle on Friday cut buyers claws.

Growth scenario: November futures, the expiration date is October 20. If we fall to 32.00, then it is worth looking for opportunities to enter the long. It is unlikely that sellers will be able to pass this level before the meeting of the OPEC technical committee on the 15th.

Falling scenario: hold the shorts. So far, everything is going well. The market behaves as we saw it back in early September. The target at 32.00 is quite realistic. After a pause, a deeper dive is not excluded. 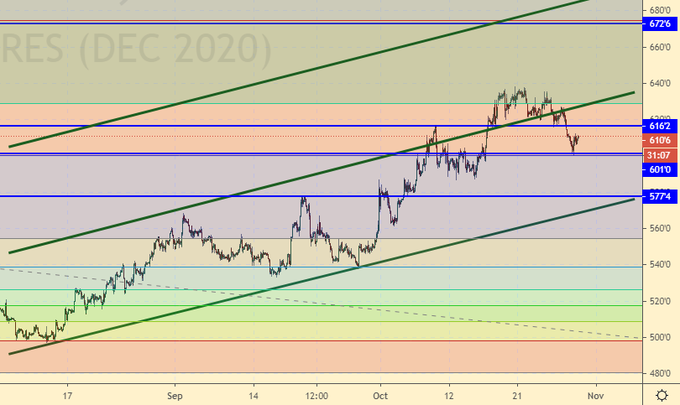 Growth scenario: October futures, the expiration date is October 12. It is worth thinking hard about buying when approaching 300.0. The level is extremely interesting for buyers. However, if the oil market drops in a recoilless mode, it is not worth buying.

Falling scenario: continue to wait for the move to 300.0. Given the situation, I would like to hold the shorts even after reaching the designated level. It is possible that we will go to 270.0. But to work out this theory, only 30% of the initial volume of the open short will be enough. 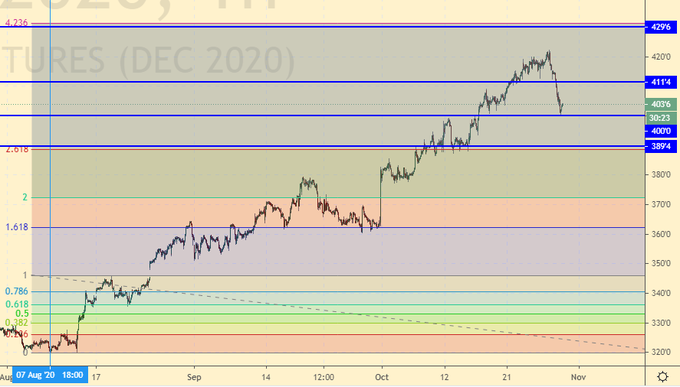 Growth scenario: November futures, the expiration date is October 28. Buyers meet the market in the area of 2.300 — 2.400. This can be seen in the long shadows down. You can buy here. The risks are not big.

Falling scenario: we continue to refuse to sell. On the eve of winter, it is inexpedient to sell one of the most important energy sources. 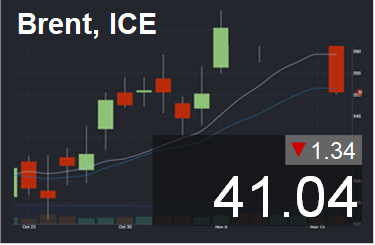 Both sellers and buyers decreased activity somewhat, which confirms our conclusion that there is uncertainty in the market. In such a situation, it is better to refrain from active actions. There is no point in opening new positions now. Previously opened deals can be held.

Growth scenario: December futures, the expiration date December 14. On the second try, they caught a long from the 540.0 area. Despite a good leap forward on Wednesday, there are fears that we will not be able to approach 600.0. Three consecutively growing highs practically on the same line do not bode well for bulls. We pull up stop orders. We wait.

Falling scenario: if the market falls below 545.0 again, then this is an unambiguous short. There is a threat of breaking the growing impulse upward, which will lead to a depression for many months to get out of which will be extremely difficult. In addition, it makes sense to sell when approaching 600.0. 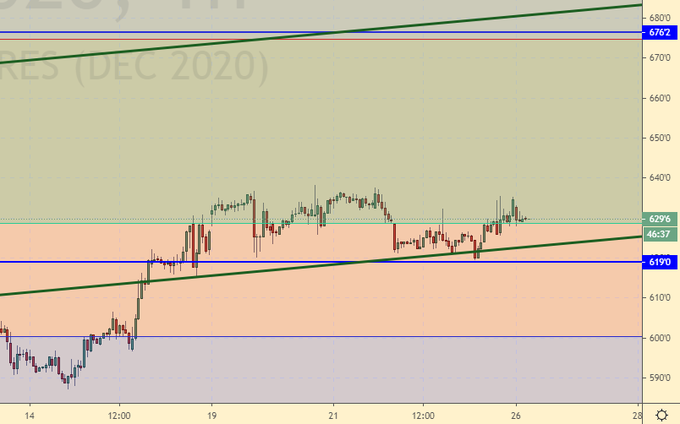 Albeit insignificant, but the simultaneous outflow of money from speculators from the market shows us that there is uncertainty with the trend. Note that the record harvest puts pressure on the minds of traders, it is not easy to buy in such circumstances. Not everyone is in a hurry to support the bulls.

Growth scenario: December futures, the expiration date is December 14. There is no sense in waiting for our target to touch at 387.0. We take profit at the current price. Whoever has already done this, our sincere congratulations.

Falling scenario: when approaching 387.0, you have to sell. There are prerequisites that the second wave of coronavirus will be softer. Nobody will close any ports, as it was in the spring. This means that there will be no logistical problems. In addition, the dollar is strengthening, which will reduce the export potential of US corn.

Purchase: no. Close everything. Congratulations on your profit. 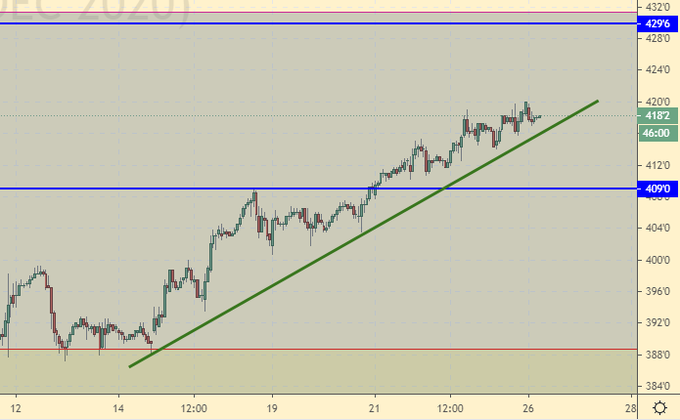 Growth scenario: November futures, the expiration date is November 13. We are objectively high so that we can talk about purchases. Out of the market.

Falling scenario: another downward price branch suggests itself. The move to 940.0 is quite possible, therefore we keep the previously opened shorts, and in addition, we sell from the current levels.

Growth scenario: March futures, the expiration date is February 26. Prices have left the growing channel, and now they tend to return to it, but this will be extremely difficult to do due to the aggressive slope of the straight lines. We can hardly go above 13.80. We are not buying yet.

Falling scenario: we continue to think that the 13.60 area is a great spot for a short. We go on sale. We expect the market to fall to the 11.70 area.

Falling scenario: we think about shorts only in case of growth to 125.00. The current levels are extremely low.

Growth scenario: despite growth by 1920, we continue to believe that sellers still control the market. We are in a falling price channel, and until we get out of it, we should not give preference to the bulls.

Falling scenario: sell here. The move to 1780 will be the natural course of events in this situation. 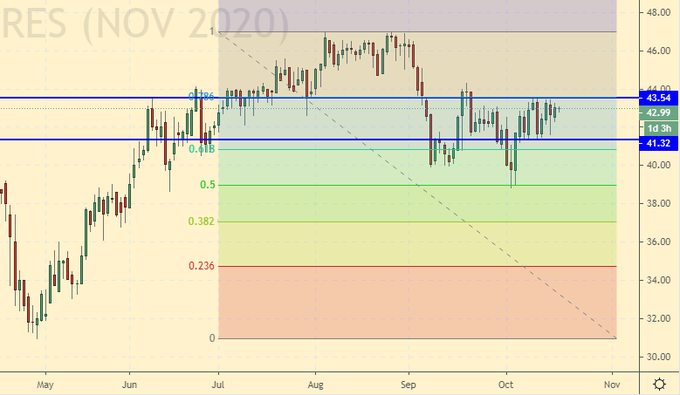 Growth scenario: for the dollar, another wave of strengthening suggests itself. Only if the market consolidates above 1.1800 will it make sense to talk about buying.

Falling scenario: here you need to sell or increase previously opened positions. The market is in a position to go to 1.1350. 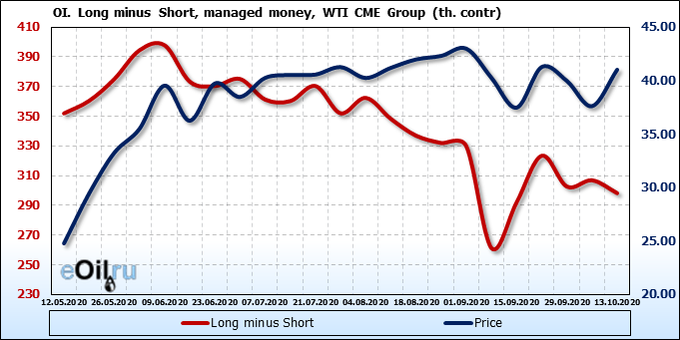 Growth scenario: we have successfully met the target at 77.90. All with a profit. Now we need a pullback to 76.00 so that we can enter the purchase again. If it does not exist, and the pair continues to rise, we will prefer to stay out of the market on daily intervals.

Falling scenario: bulls were clearly overwhelmed by emotions during the week. We sharply went to 80.00, where, it is possible, the Central Bank entered the market with a lot, which cooled the ardor of buyers. Correction to 76.00 is possible, but it is better to work it out at hourly intervals. 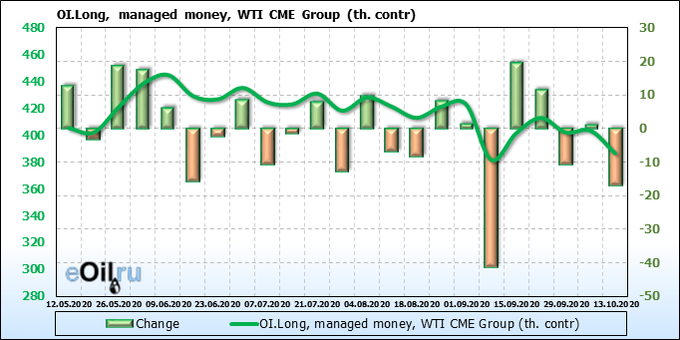 Growth scenario: the market has drawn a five-wave downward impulse. We are waiting for the rise to the area of 1220, after which another wave of decline should follow. If there is no upward correction, we will simply fall to 1000. Don’t buy yet.

Falling scenario: we continue to believe that if the market recovers to 1220, we need to increase the shorts. The 1000 target looks quite achievable. Strengthening tax administration by the government does not add optimism to bidders. 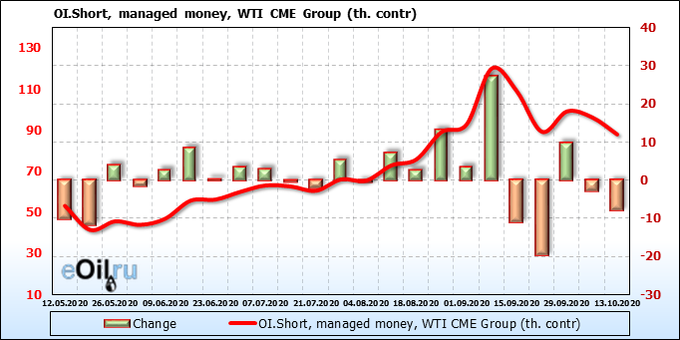