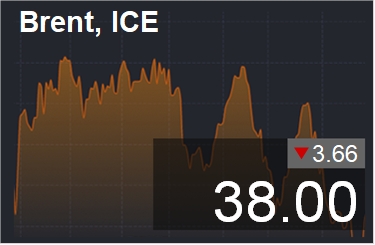 The OPEC ministerial meeting was as neutral as possible. The whole attention shifted to the next meeting on November 16-17. There were no statements related to a possible reduction in production. It was stated that the current level of production is less than consumption by 1 million barrels per day, so nothing needs to be done except to force the violators of the discipline of the past months to hold on to production.

Europe continues to plunge into the abyss of a new stage of the pandemic. On the one hand, hospitals cannot cope, on the other hand, the authorities are in no hurry to introduce strong isolation measures to save the economy from recession. While greed wins, let’s see what happens next. Note that if humanism wins, and serious restrictive measures up to curfew are adopted in Europe, then oil prices will go to an intensive fall.

Panic buying of grain from the new harvest is doing its job. Exchange prices for wheat in Chicago have not yet rolled back and are claiming to reach the level of 670 cents per bushel, which is comparable to FOB prices around $ 260 per ton.

The World Bank has estimated the rise in food commodity prices in July-September 2020. On average, prices rose 6% — with growth seen in almost all categories.

In October, growth continued in almost all agricultural crops and processed products. Only coffee is allocated, the cost of which decreased in October.

Rising food costs will hit the poor, keeping governments in suspense in many countries as discontent rises.

The RF Central Bank left the rate at 4.25%. The press release was somewhat surprised by the fact that it directly indicated the bank’s desire to lower the rate in the future when appropriate conditions appear, that is, when inflation falls below 4%.

It is not clear how this inflation will be drawn with the soaring prices for grain and sunflower oil this fall. You also need to take into account the increase in import prices due to the fall in the ruble exchange rate from 61.20 to 76.15 rubles per dollar, so the fall was 24.4% since the beginning of the year.

So far, the ruble has headed for strengthening. It is unlikely that the couple will vigorously go down, as concerns about the introduction of strict quarantine in the country remain. Nevertheless, oil is above 40.00 and good OFZ sales on Wednesdays make the picture quite optimistic for the next couple of months.

The buyers tried to push, but nothing came of it, at least not yet. If the market goes down next week, then speculators will have to do something with 30 thousand contracts that were probably unsuccessfully bought on the market over the past two weeks, or rather, they will have to be sold, which may increase the fall in prices.

Growth scenario: October futures, the expiration date October 30. Since the OPEC + meeting was held without loud statements, the market was left on its own for another month. A pandemic will have a big impact. The fewer the consequences for the economy, the better for oil. So far, we see no reasons for the rise in prices.

Falling scenario: those who did not enter short, wait prices to fall below 41.00. The situation is mainly balanced at the moment. Need some kind of driver. Perhaps they will be the results of the US elections, and until November 3 the market will be dozy.

Purchase: think after rising above 44.00. 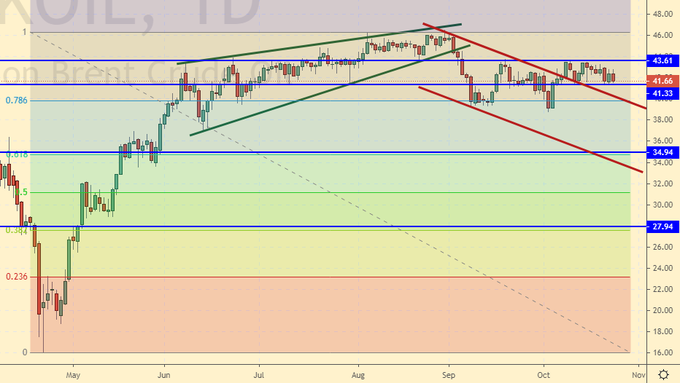 Fundamental US data: the number of active drilling rigs increased by 6 units to 211 units. 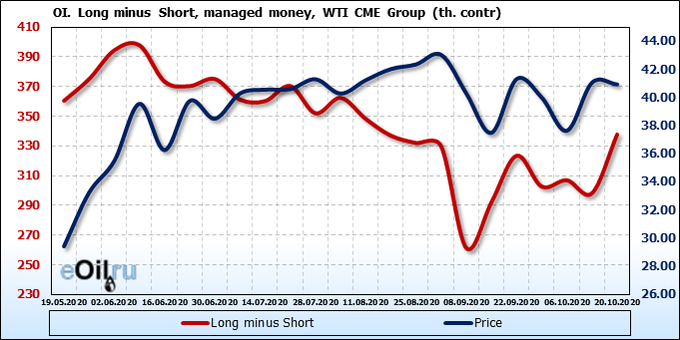 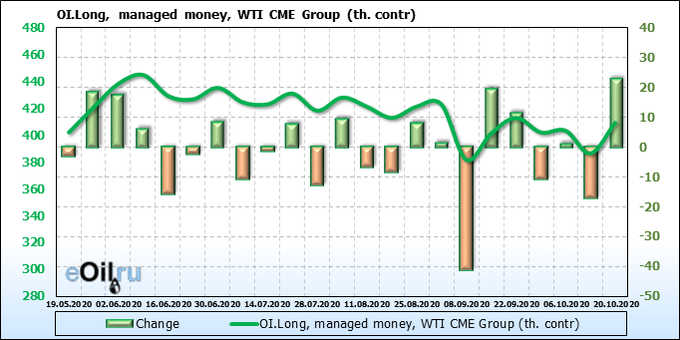 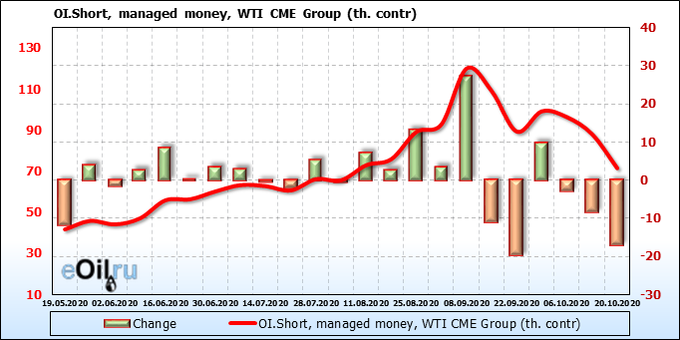 The bulls tried to attack, but nothing came of it. “We talked and went our separate ways” — this is not the result that buyers expected from the OPEC + meeting. The bulls’ hopes were trampled upon by very spatial speculations about vaccines, supply-demand balances, and discipline breakers. Nothing specific. And I would like to hear that in the event of a strict quarantine in the United States, for example, OPEC + will automatically reduce production by 1 million barrels, or something like that.

Growth scenario: December futures, the expiration date November 20. We continue to believe that there is no point in speculating about purchases until we have risen above 42.00. Market is in balance.

Falling scenario: prices are slowly beginning to probe support at 39.00, if it is broken, then you can sell.

Purchase: think after rising above 42.00.

Sale: think after the market falls below 39.00. 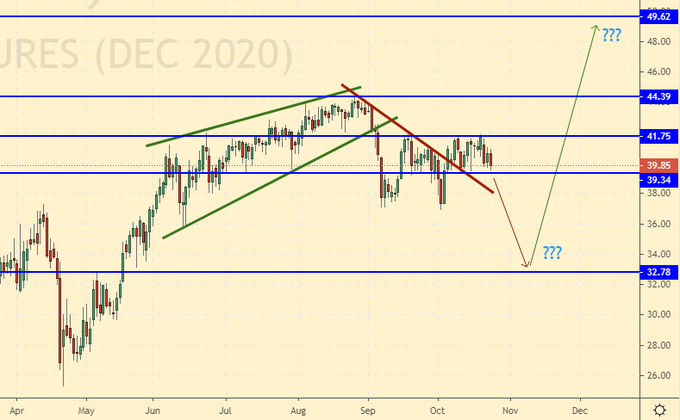 Growth scenario: November futures, the expiration date November 12. Everything is pretty neutral. Neither side has an advantage. Until we open positions below 355.0.

Falling scenario: sell here. The move down is not obvious, but a weak-willed Friday could be the beginning of a fall to 280.00. 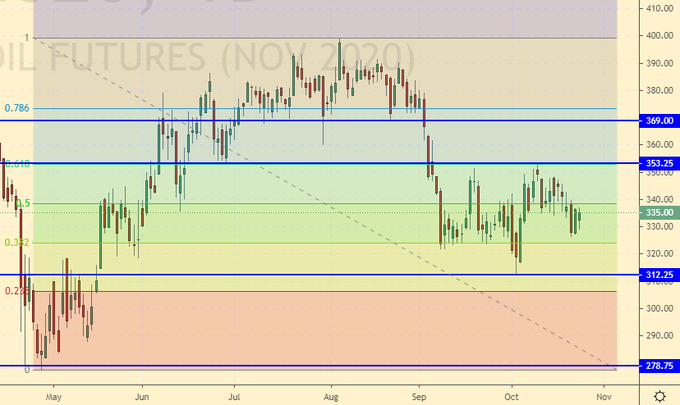 Growth scenario: December futures, the expiration date November 25. We switched to December futures. Here you can buy with the target at 3.500. In a pandemic, countries create the maximum reserves they can afford.

Falling scenario: there is no point in shorts yet. We need a rise to 3.500. And when it happens, you still have to look at the news background before deciding to sell. 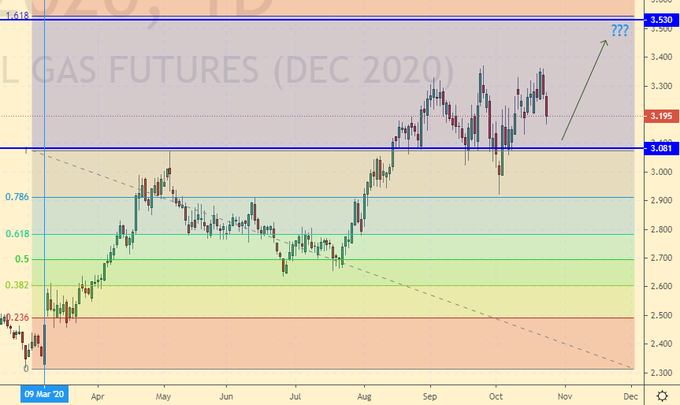 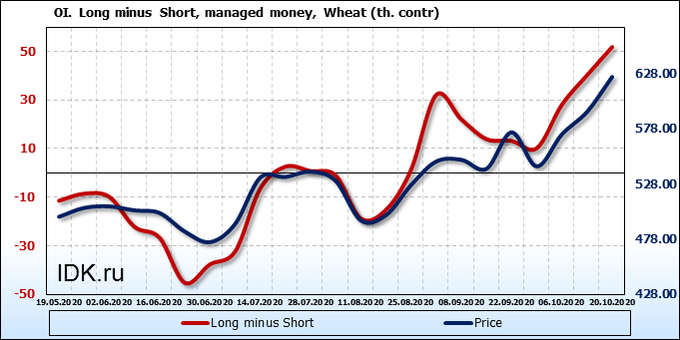 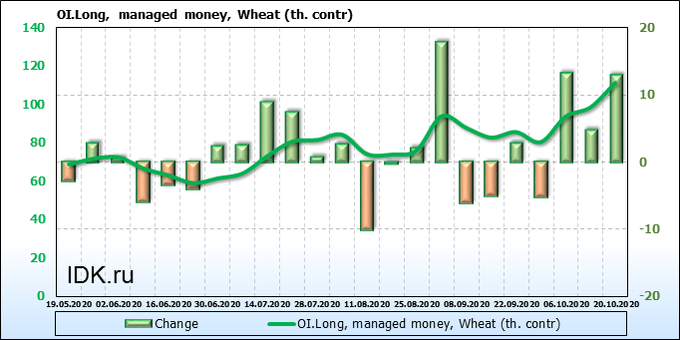 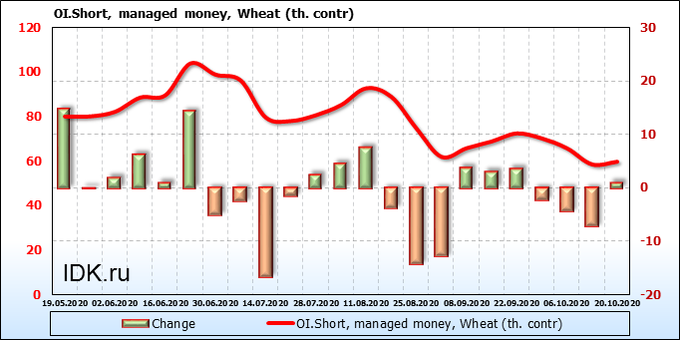 The bulls are tearing apart the market for three weeks in a row. The first sellers have appeared, but there are still very few of them. Prices have a growth potential of about six to seven percent, after which there should be much more sellers.

Growth scenario: December futures, the expiration date December 14. The market does not roll back against our expectations. The current levels are high for speculative buying. We are out of the market.

Falling scenario: it makes sense to sell only when approaching 675.0. The bulls are in full control of the situation for now. 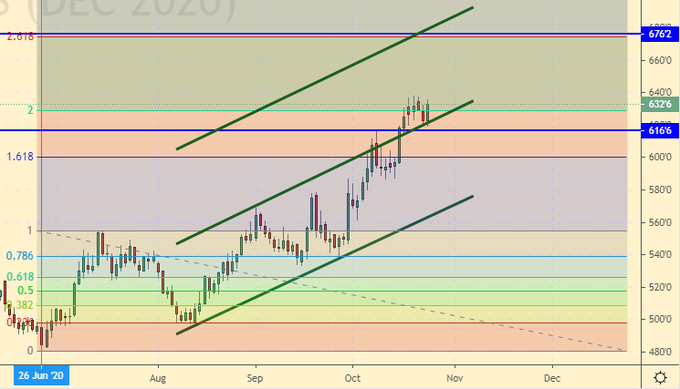 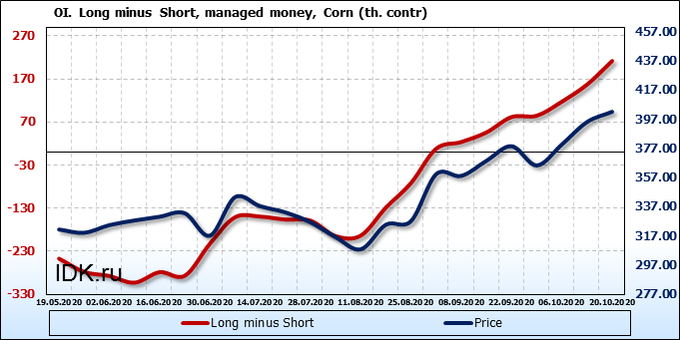 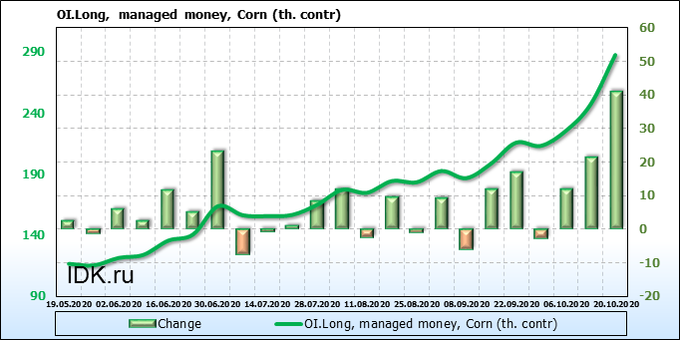 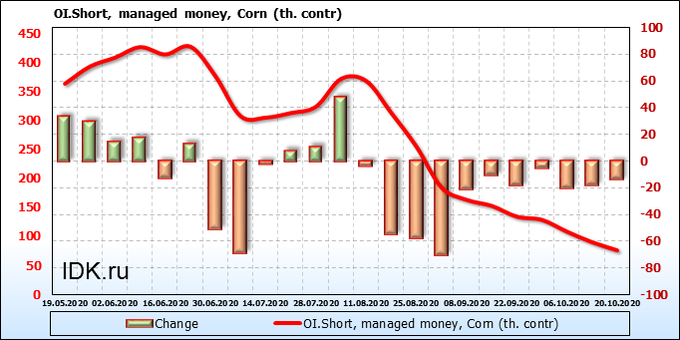 Growth rates have been rising for three consecutive weeks. There is not a single salesperson on the horizon. This will continue until we rise to 430.0 cents per bushel. Stronger growth will only be possible if the wheat does not stop and goes above 670.0.

Growth scenario: December futures, the expiration date December 14. It’s a pity, but we will not be able to capture the current growth, since the market did not roll back. In contrast, prices continue to accelerate. We are out of the market.

Falling scenario: we continue to believe that when approaching 430.0 it is necessary to sell without fail. We are gaining patience, preparing money. 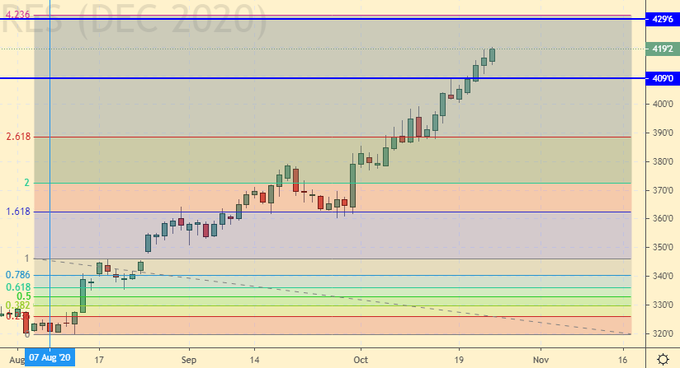 Growth scenario: November futures, the expiration date November 13. Market growth resumed. No doubt we are heading to 1170. At this stage, we do nothing, only hold the longs that were opened earlier.

Falling scenario: we continue to wait for prices to approach the 1180 area. Given the scale of events, the correction should be quite significant there. 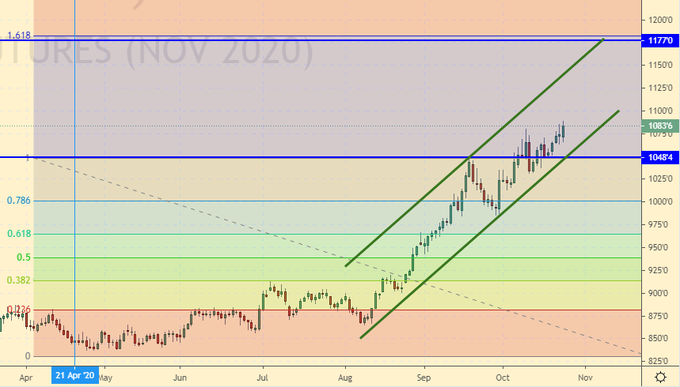 Growth scenario: March futures, the expiration date February 26. We keep longs. The target at 15.95 remains. We continue to aggressively move the stop along the trend.

Falling scenario: we will sell when we approach the area of 16.00, not earlier. Apparently, people ease stress from the pandemic by eating sweeties. You cannot drink, you cannot smoke, you only have to eat pastries. 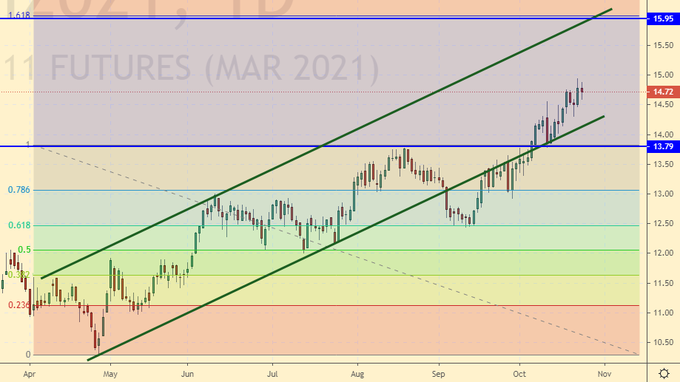 Growth scenario: December futures, the expiration date December 18. “It will be very unpleasant if the market falls below 105.0,” we wrote a week earlier. And this, unfortunately, happened. The situation became incomprehensible. We are out of the market.

Falling scenario: that’s going too far. The general background in the market is bullish, and coffee is going underground. It’s strange. We will not sell. The levels are low. 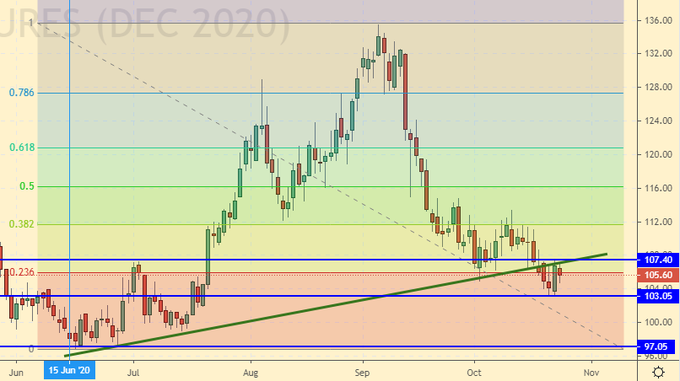 Growth scenario: a week has passed, but the situation has not become clearer. As before, we recommend buying after the growth above 1936. It is possible that the market will remain inert until November 3, before the US elections. If a mess begins there, and with weapons in hand, the gold will burst up.

Falling scenario: technically nothing new, if prices go below 1875, then we can count on a continuation of the fall to 1770. Until this happens, sales are out of the question. 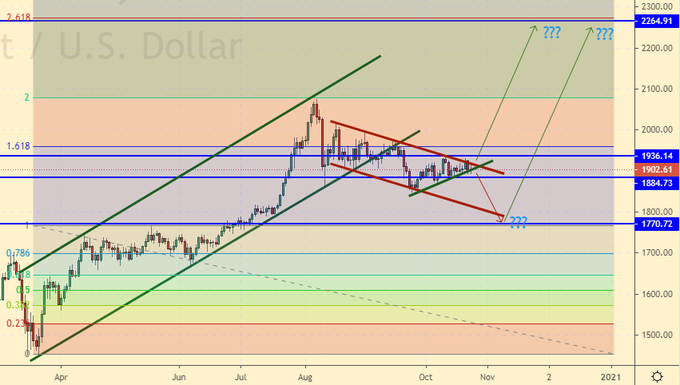 Growth scenario: “in case of another rise in prices above 1.1800, we will buy again” — this is a quote from last week. And so they did. The move to 1.2500 is our target. We look forward to unrest in the US and the weakening of the dollar amid demonstrations and protests.

Falling scenario: the market has pulled down the stop at 1.1841. So be it. The bulls showed a new local high last week. We are not making new sales yet. 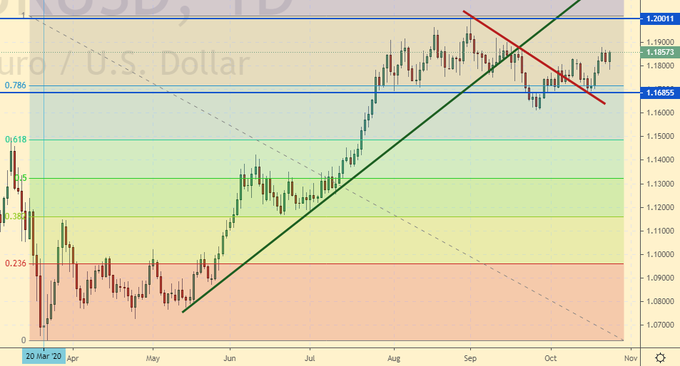 Growth scenario: the pair broke through the long-term support and headed for 74.00. There is no sense now to enter the market with purchases. The escalation of events in Belarus may do some harm, but nothing is clear there yet. We do not buy.

Falling scenario: what an unpleasant Thursday with its long shadow up. And it’s great that our stop was registered at 78.60. We can expect a drop to 74.00. We will talk about deeper levels later. 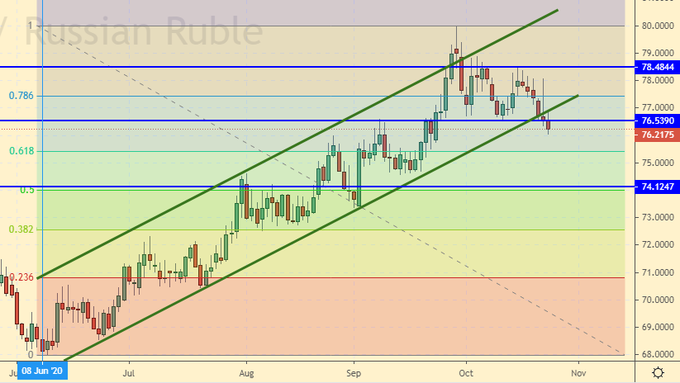 Growth scenario: the strengthening ruble helps the index to feel the ground under its feet. The prospects for making a profit for Russian companies in 2020 remain vague, but it is worth noting an increase in mortgage volumes, an increase in prices for metals, gas and coal, and stable oil prices. There is only one serious danger: strict quarantine due to the virus.

Falling scenario: stop at 1177. Let it be there. If it works, then we will not sell any more. Let’s wait for the situation to be clarified. 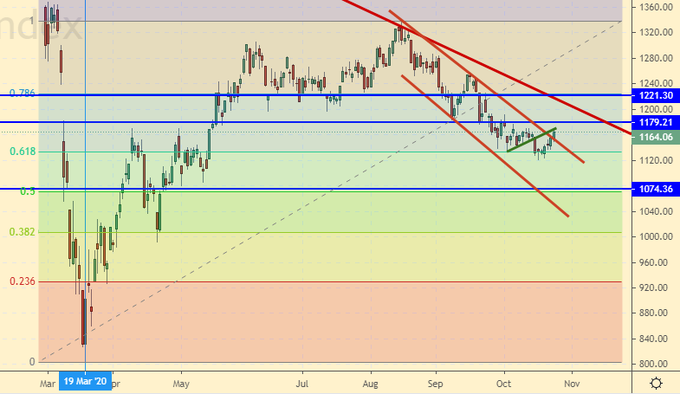