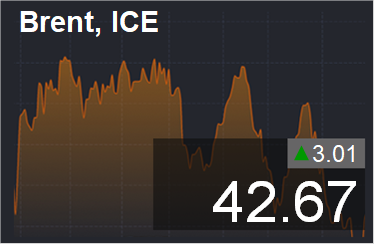 There are no countries left in the world that have not been affected by the pandemic. There are more and more sick people, this is especially true for the Eurozone. The situation has also worsened in the United States. German scientists say straight that there is no proven vaccine yet, and that 2021 will be held in the fight against the virus.

How will oil prices rise in such conditions? All exporting countries need currency like air. However, buyers are becoming less and less, countries operate in a limited mode. Tourism and the service sector will not be able to count on normal conditions for at least two more years. People are cutting back on travel and minimizing contact.

In this regard, the reaction of the OPEC + countries to what is happening at the next meeting on the 16th — 17th is interesting. If there is even a hint that production will increase from January, the market will refuse to understand this approach and will fall.

In addition to the not too disciplined Iran and Iraq, Libya has been added to the number of problem countries, which does not want to discuss anything until oil production in the country rises to 1.7 million barrels per day. There was something like a truce and an active growth in production began immediately, which is understandable. But OPEC will have to cut something down somewhere.

Among other things, the number of active drilling rigs has been growing in the US for a month now. In the future, this also does not bode well for the market.

Acting in concert, the OPEC + countries can bring the market to 50.00 for some time, but it will be extremely difficult to keep quotes at this level.

The grain market corrected after a phase of active growth. The main question for the next week or two is whether the correction is over or not.

Fundamental reasons for price increases can only emerge if producers begin to experience logistical problems in supplying crops to their own ports for export. So far, nothing is known about such problems.

At the moment, the market is perceived to be quite balanced, given the harvest volumes of the current season. In the future, the emphasis will shift to the accumulation of moisture in the fields during the winter months. There may be surprises that can support the quotes.

Wheat and corn prices are likely to rise by 10-12% by the end of the year, but we are unlikely to see stronger growth.

The ruble continues to look better than the expectations of that part of the crowd, which with some fanaticism is waiting for 100 rubles per dollar. Russian debt securities continue to be in demand due to reasonable oil prices, which are supporting the ruble.

The Russian currency saves face thanks to the American mess with elections and the European desire in a number of countries, for example, in Austria, to tie everyone to bunks for two weeks.

Note that with the West losing interest in life, China will also begin to suffocate. Exports will inevitably fall. Beijing’s signature on November 15 under the new free trade area with ASEAN countries confirms that our neighbor is looking for new ways of development. Australia, South Korea and Japan also participate in the agreement. There are no Americas and Europe there.

We see some growth in interest from the bulls. The current levels look attractive, so we expect the buyers’ activity to continue growing next week.

Growth scenario: November futures, expiration date November 30. Broke through 42.00 and went down. Not a bad situation to enter long. We do not deny the possibility of falling to 40.50, but prices are unlikely to go lower. 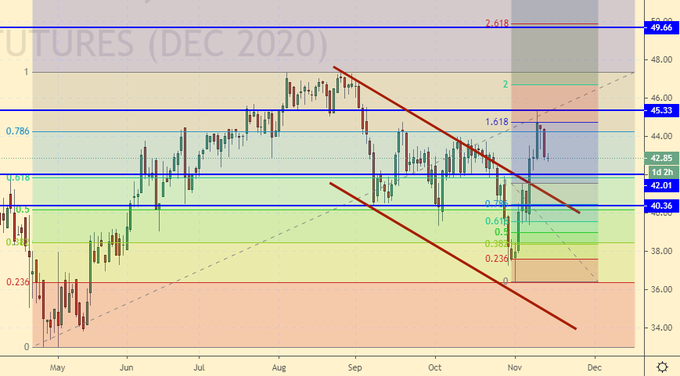 Fundamental US data: the number of active drilling rigs increased by 10 units to 236 units.

rowth scenario: December futures, expiration date November 20. We see a breakout and pullback. We buy. If OPEC pays more attention to Libya and encourages it to dialogue, it will support the market.

Falling scenario: move up looks aggressive. We will not sell. 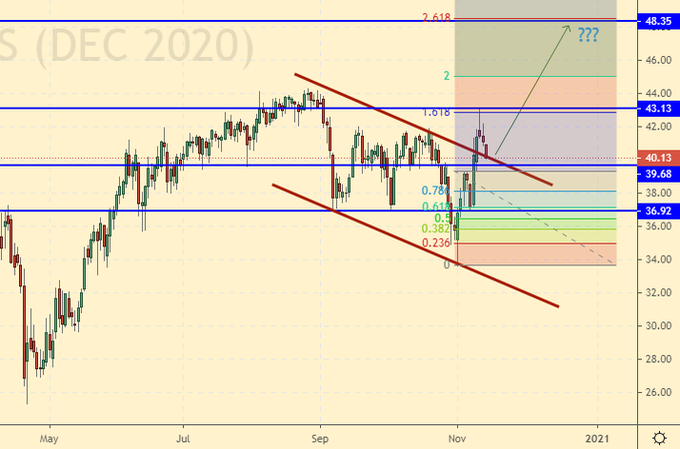 Growth scenario: December futures, expiration date December 10. It should be admitted that this exit to the top was unexpected. Now we have the prerequisites for the formation of an upward impulse. You have to buy.

Falling scenario: too bad the shorts didn’t work out. We take a break. We are not selling yet. Recommendation: 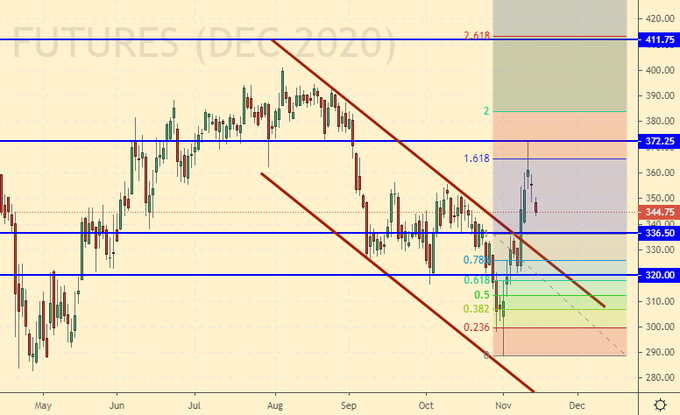 Growth scenario: December futures, expiration date November 25. It is difficult for the market to grow amid warm weather in Europe. We see that sellers meet the market when they approach 3.100. Only if we go above this level will it be possible to buy.

Falling scenario: short from current levels does not have a lot of potential for taking profit, we do not sell. 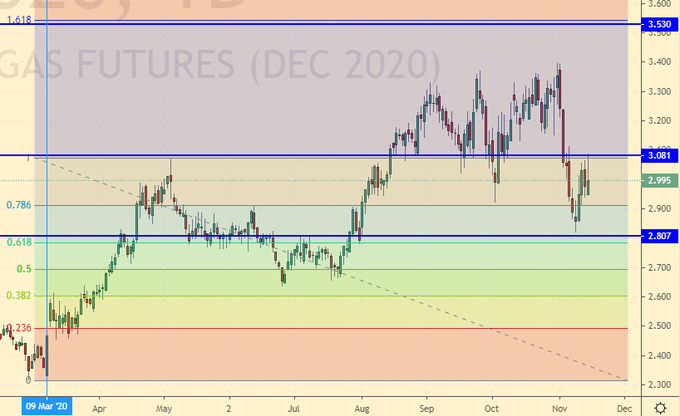 Growth scenario: December futures, expiration date December 14. We found support at the lower border of the growing channel. It is not clear yet whether the market can continue to grow. The scenario of the descent to 560.0 remains in my head. It will be possible to buy on the breakout only after rising above 615.0. Consider the risks.

Falling scenario: we fail to enter short. Who does not want to miss a possible drop to 560.0 please be patient. We will sell only on a pullback up to 608.0. 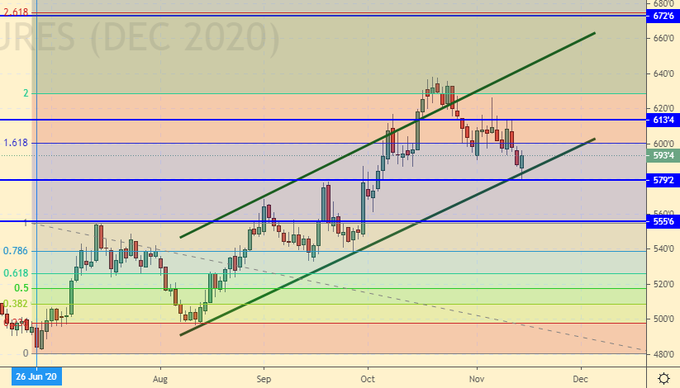 Growth scenario: December futures, expiration date December 14. It was possible to close longs, or at least some of them last week when approaching 430.0. If you have not done this, hold positions, there is a scenario in which the market will grow to 480.0.

Falling scenario: the market approached 427.0 for two days in a row, you should have been short in one way or another last week. If you haven’t done so, then wait for the rise to 418.0 and sell. 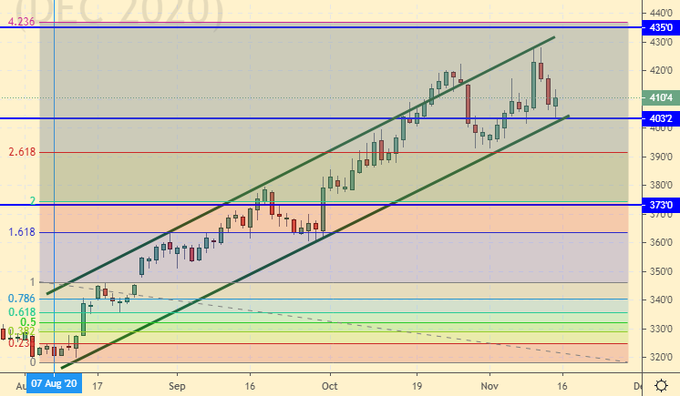 Growth scenario: January futures, expiration date January 14. There is nothing to think about. It is necessary to take profit. Congratulations to everyone with a successful trend from 1050.0. We do not make new purchases.

Falling scenario: this situation is comfortable for the short. We sell now. We build up with the growth of the market.

Growth scenario: March futures, the expiration date February 26. The target at 15.95 remains. The market is not inclined to correct downward, which creates good prospects for growth.

Falling scenario: the idea is the same, we will sell when we approach the area of 16.00, not earlier. Recommendation: 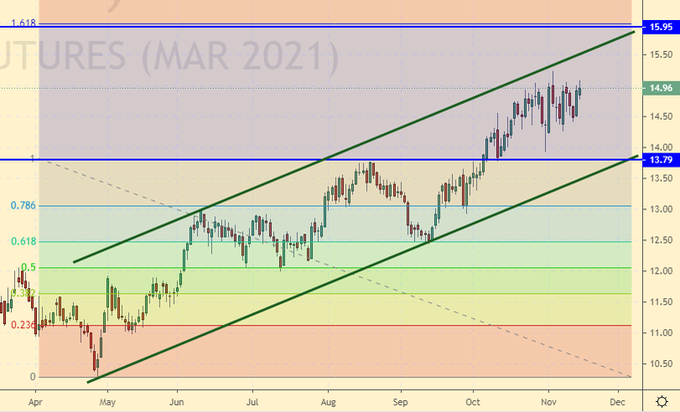 Growth scenario: December futures, expiration date December 18. The market has not yet managed to gain a foothold above 110.0. If you’re in, stop. If not, then wait for a new rise above 110.0 and buy.

Falling scenario: let’s refrain from selling for now. The market is trying to move away from the minimum levels. Let’s not bother him. 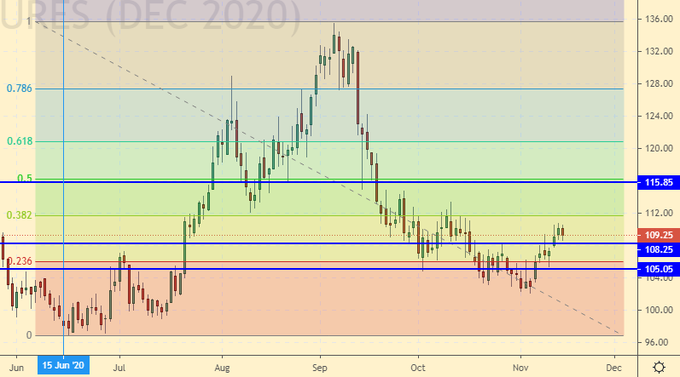 Growth scenario: what will finish off traders faster: virus or vaccine development reports and American elections. Gold is back on the dark side thanks to Pfizer and its vaccine, we don’t buy.

Falling scenario: prices returned to the falling channel — sell. We have had a mark at 1780 for a long time. It’s time to visit her. This will make everyone feel better. So banks are writing about gold at 2600 next year. It’s time to fall. Recommendations: 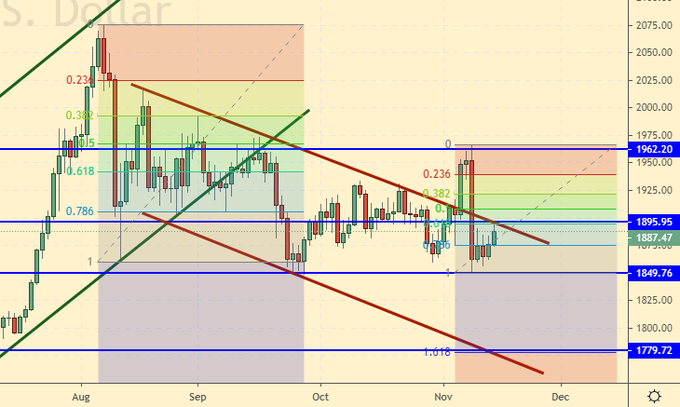 Growth scenario: buyers tried to consolidate above 1.1900. So far this has not succeeded, but the technical picture is still for them. We buy again.

Falling scenario: let’s get back to talking about shorts only if it falls below 1.1700. 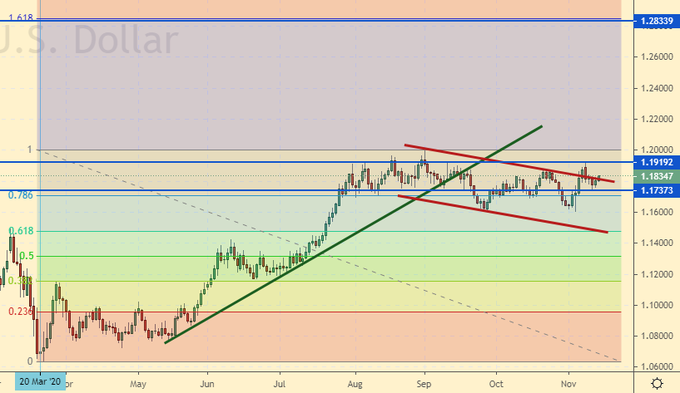 Growth scenario: we do not see long green candles upwards. The bulls have nothing to rely on yet. We are not buying yet. The Russian debt index RGBI continues to be in good shape.

Falling scenario: sorry, but the “thorn” pattern didn’t form. The market rolled back from 75.80 upwards, but the favorable situation for sellers still remains. You can try to sell the dollar against the ruble. 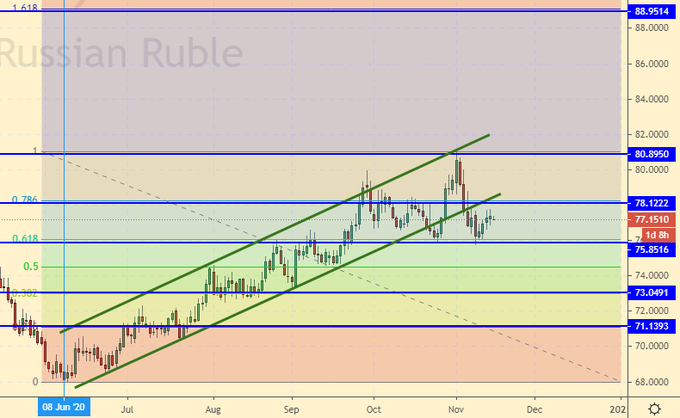 Growth scenario: if the oil market does not let us down, then we can expect a recovery to 170,000. We will hardly go higher, but we can demonstrate something in the form of a New Year rally. But we are unlikely to show an aggressive rise under Biden, this must be borne in mind.

Falling scenario: “we are unlikely to turn down sharply next week,” we noted a week ago and were right. We do not want to fall, even to be corrected. We are not selling yet. Recommendation: 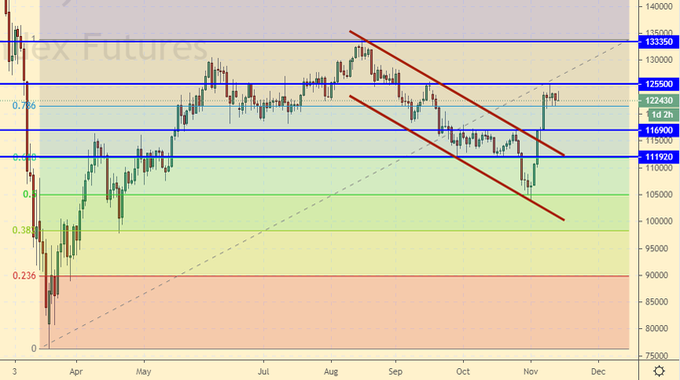