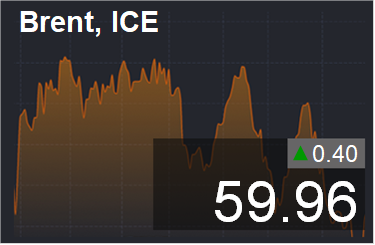 Strong growth in the oil market last week does not correlate well with expectations of demand growth over the next three – six months. Quarantine measures continue to restrain economic recovery in the Eurozone and the United States. So this year will not be much better than 2020. It is somewhat naive to count on an increase in oil demand up to 100 million barrels a day. The vaccination program is gaining momentum, but this year will be clearly inadequate in terms of taking advantage of all available economic opportunities.

It cannot be ruled out that the current rise in prices is due to the desire of Saudi Arabia to conduct the SPO Saudi Aramco as best as possible. At the end of January, there was a rumor that new initiatives to raise money were possible if the market conditions were good. It is the exporters themselves who create these conditions for themselves by pushing the market up. The version is not bad, it has a right to exist. The market is currently overbought. Those who expect to see oil prices above $ 60.00 per barrel in the near future may be disappointed.

In the wheat market, a behind-the-scenes struggle continues between exporters and importers. The results of the confrontation are announced at the ongoing tenders. So, Egypt at the last tender did not buy wheat with an offer of more than three hundred dollars per ton. Those suppliers who were allowed to participate and wanted to come to a deal were forced to cut prices by $ 3-8.

For its part, GASC also made concessions by buying double volumes from suppliers who agreed to give a discount. It is very likely, based on seasonality, that the wheat market for the next three months, against the background of the expectation of a new harvest, will tend to slightly decline. If there is no drama in the reports on the situation with winter crops, prices will be planned downward until May.

Attention is drawn to the strengthening of the ruble last week on Thursday and Friday. If prices for Brent crude oil manage to break above sixty dollars, then the ruble will have chances to strengthen despite the negative foreign policy. Otherwise, we should expect the pair to rise to the 80.00 level.

However, this weakening of the national currency will not happen overnight, but rather, the process will drag on until the end of March. The likelihood of sanctions, for example, because of Navalny, exists. But the West, due to negative economic performance last year, is in a very difficult position to indulge in attacks in the direction of Moscow or anyone else. The Kremlin will respond to the new restrictions, there is no doubt about that. Ultimately, the confrontation will lead to losses on both sides. Rather, Washington and Brussels will be cautious. So the construction of the «Nord Stream-2» resumed in the waters of Denmark. Who knows what winter will be like next year.

The bulls press on the market. We see that sellers cannot withstand the pressure and leave the market. So far, there is simply no one to break the current growing trend.

Growth scenario: February futures, expiration date February 26. There are no new shopping opportunities. Hopefully the oil won’t turn into bitcoin and will not fly 170 without a rollback.

Falling scenario: the previous short bet was unsuccessful. Nothing wrong. We look forward to a red day candle and sell again. 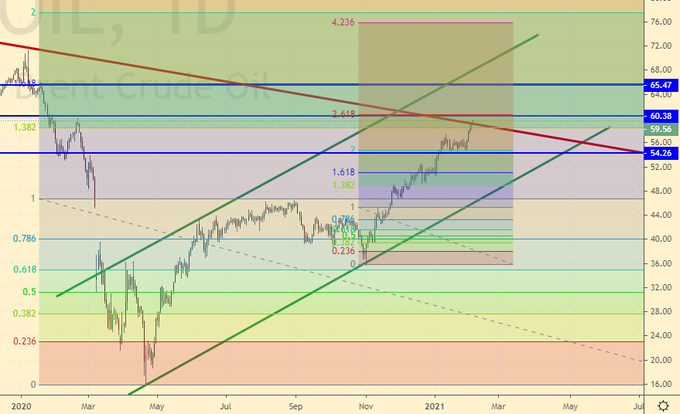 Fundamental US data: the number of active drilling rigs increased by 4 units to 299 units. 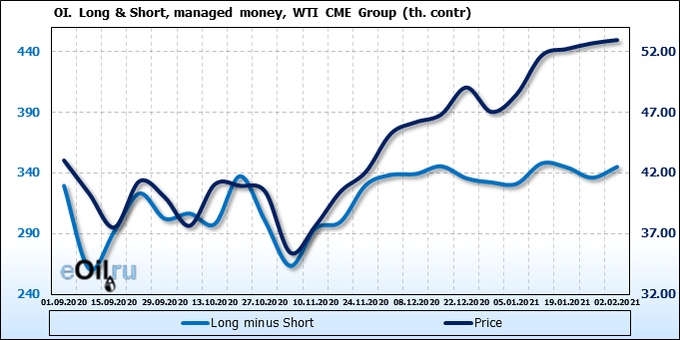 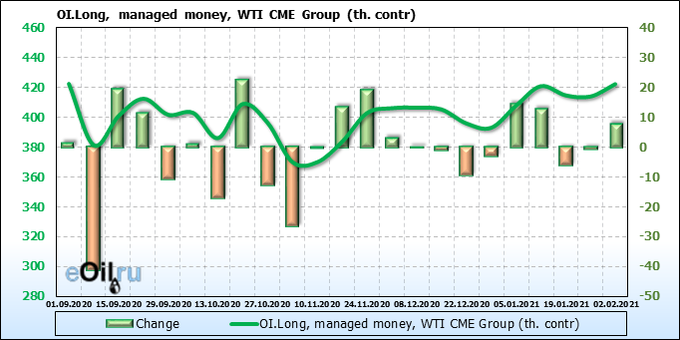 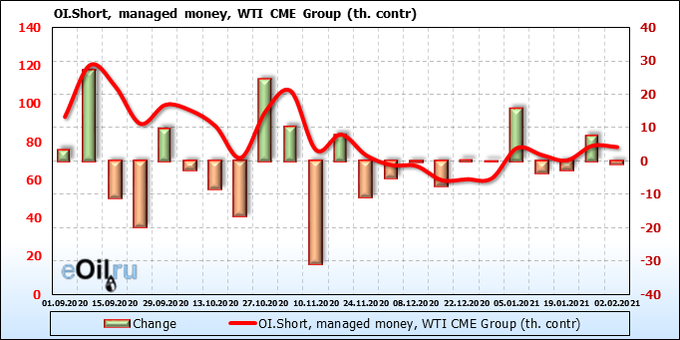 Another group of bulls entered the market, which was enough for the next phase of growth. There are no sellers in sight. Buyers are in complete control of the situation.

Growth scenario: March futures, expiration date February 22. Sharp flight up. Such bursts usually end the movement. We are waiting for a rollback.

Falling scenario: when a red daily candle appears, we will sell. The market is overbought and should be eliminated. 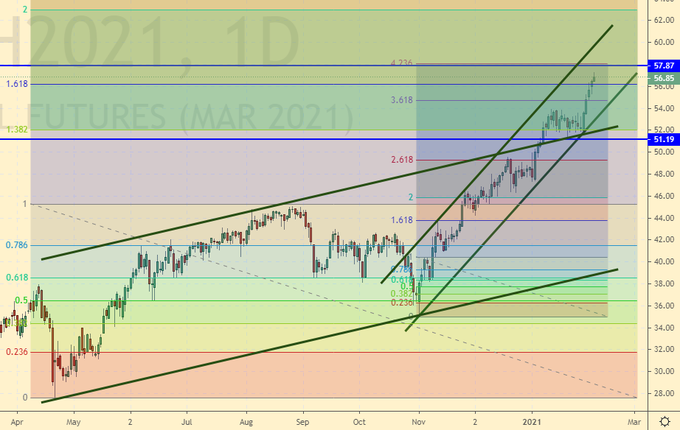 Growth scenario: March futures, expiration date March 11th. The prices have reached their target. Further growth without a rollback is hardly possible. Falling scenario: we will sell here and now. It will be extremely difficult for the market to pass through the Fibo level of 423.6%. 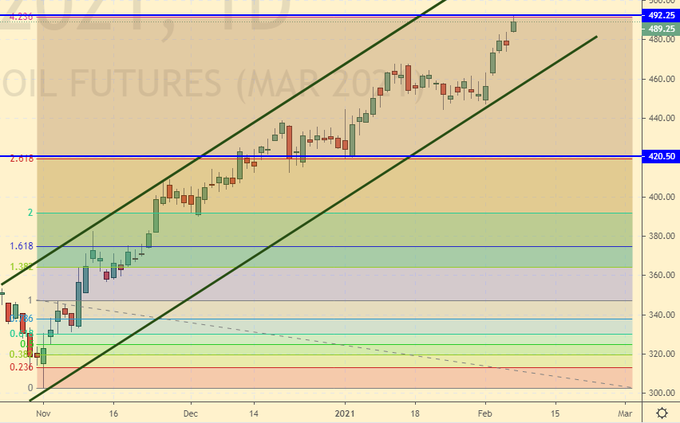 Growth scenario: March futures, expiration date February 24. Europe is emptying its gas storage facilities at a record pace. The US also has a peak in consumption. Prices can go up and further.

Falling scenario: we do not expect a fall from the market yet. We do not sell. 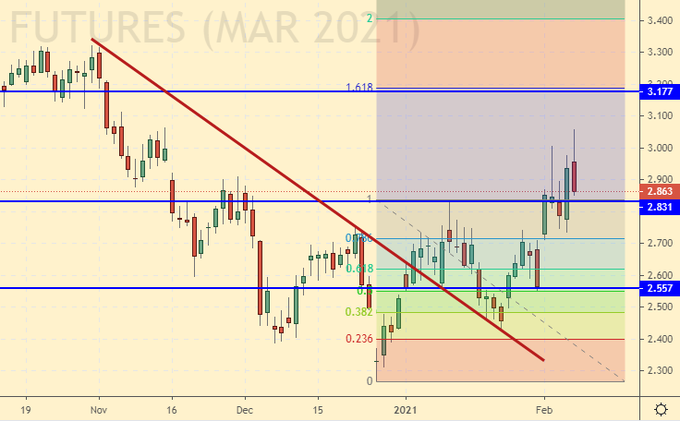 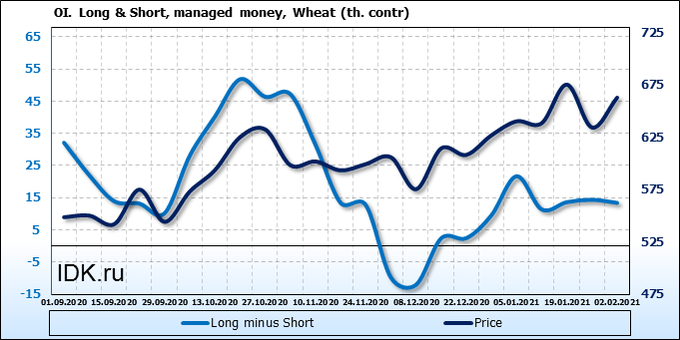 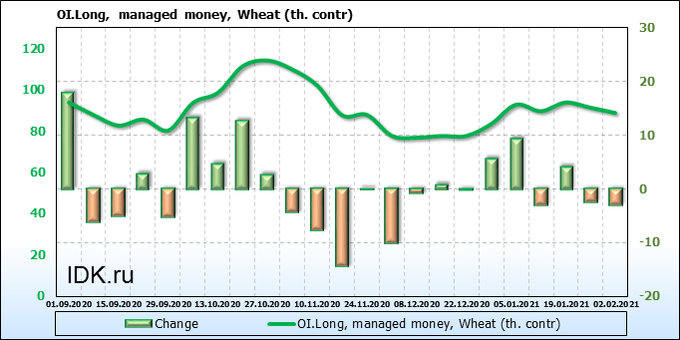 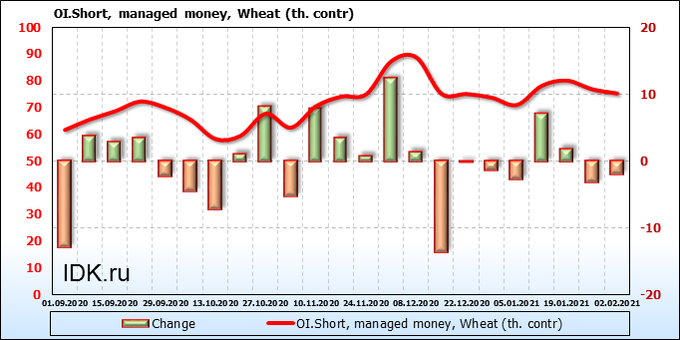 Both sellers and buyers leave the market. This adds to the uncertainty of the current situation. Market participants have no new ideas. This is more likely to result in a range movement than any trend spurt. Growth scenario: March futures, expiration date March 12. While we will refuse purchases. Considering the growth in previous months, February could be red.

Falling scenario: our perseverance has borne, so far modest, but still fruits. We entered and secured ourselves in the shorts. Now you can move the stop order a little. Next — wait. 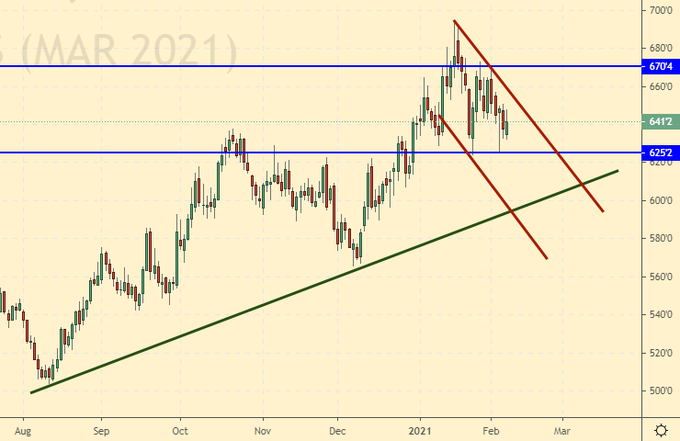 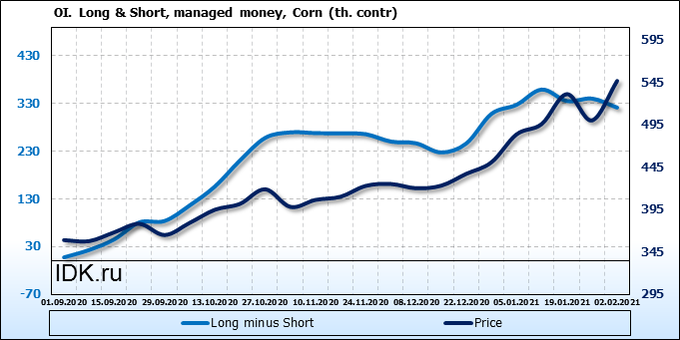 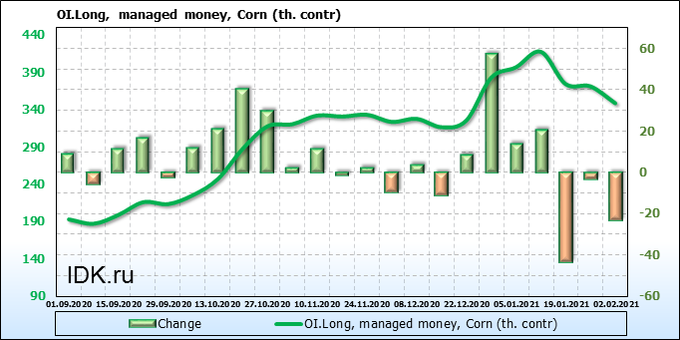 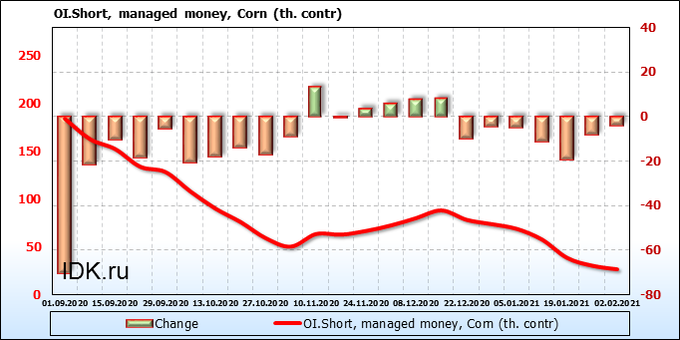 Some buyers left the market, which may be related to profit fixation. The number of shorts is not growing yet, but given the strong resistance level at 570.0, we can assume that selling pressure will rise in the near future.

Growth scenario: March futures, expiration date March 12. We do not buy. The market is high.

Falling scenario: sell here. It cannot be ruled out that the «puppeteers» will try to push the market up to 580.0, one must be ready for this. 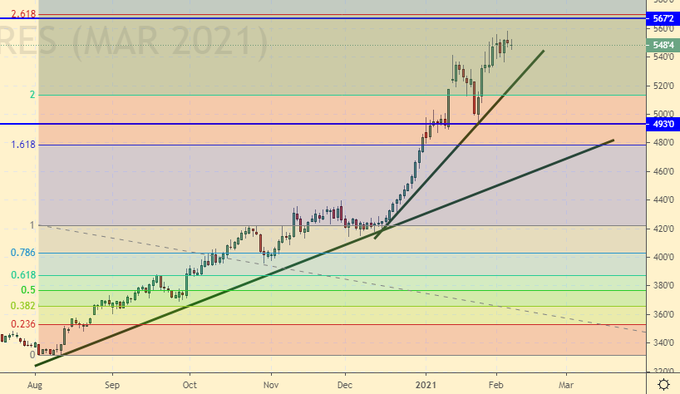 Growth scenario: March futures, expiration date March 12. Another branch of the fall suggests itself in order for the correction to be completed from the point of view of the wave theory. We do not buy.

Falling scenario: we recommend selling again. Given the specific situation, you can risk a little more than usual. 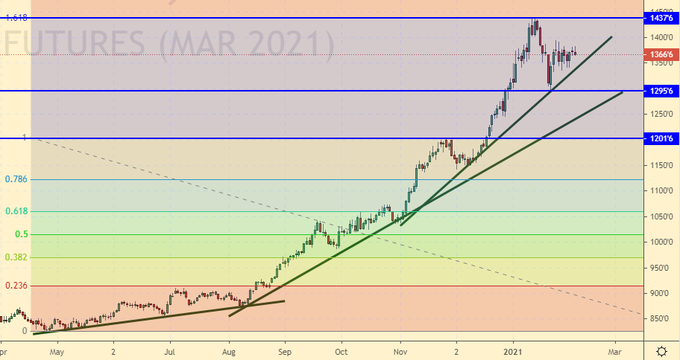 Growth scenario: March futures, expiration date February 26. There is nothing interesting here for shopping. It is better to work out a possible move to 17.18 on hourly intervals. 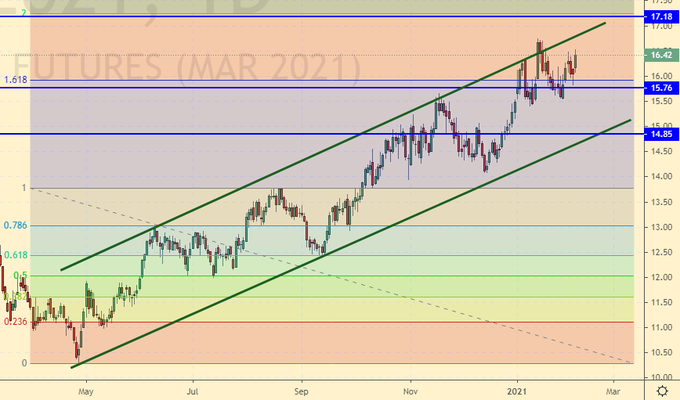 Growth scenario: March futures, expiration date March 19. We continue to count on a rollback. However, if the market rises above 128.00, you will have to buy.

Falling scenario: we continue to consider the short in the current situation as appropriate. You can sell here. Those who entered earlier are standing. 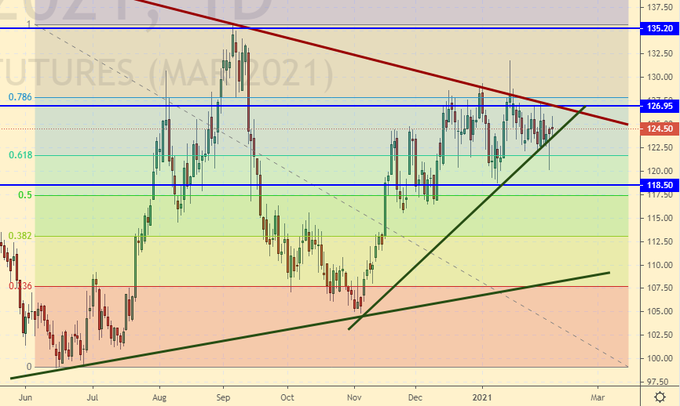 Growth scenario: we see that the crowd expects the dollar to strengthen its positions. The US government will have to raise rates. Otherwise, we will all face extremely bad times. It is possible to buy here, considering the history of Reddit and silver, however, consider the risks.

Fall scenario: Whoever sold four weeks ago is holding shorts. So far, everything is going well. 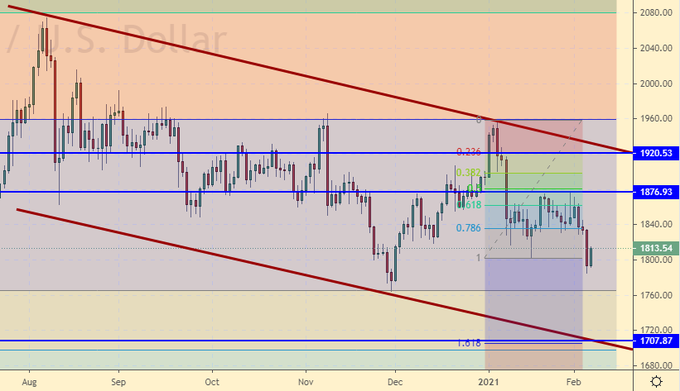 Growth scenario: prices exited the growing channel. Let’s postpone the purchase. If we grow above 1.2200, then we can talk about longs.

Falling scenario: hold the shorts. If we fix below 1.2000 without any problems, then the move to 1.1440 looks natural. 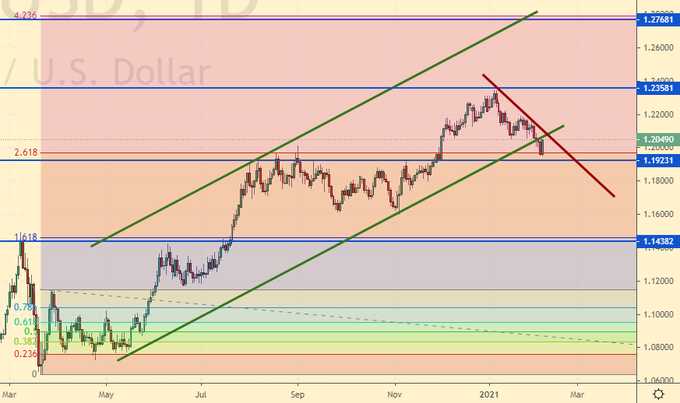 Growth scenario: since we froze on Friday, failing to break down the level of 74.40, this is a long. Here you have to buy. If oil helps and falls, then we will have a targeted move to 78.00, then a move to 81.40 will follow. 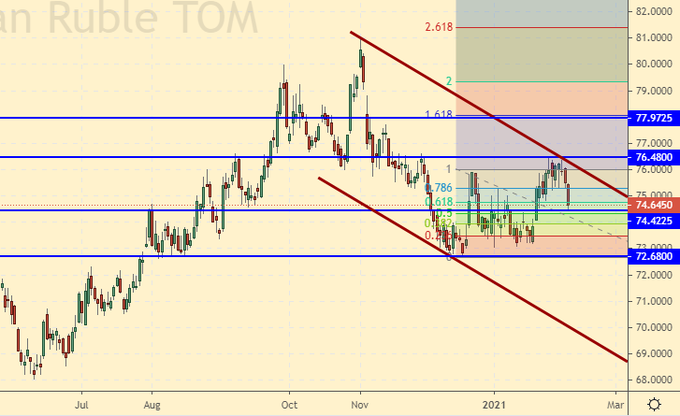 Growth scenario: March futures, expiration date March 18. We perceive the current growth as a correction to the previous fall. While oil is growing, we will recover, otherwise another wave of decline awaits us. The level 145500 is a significant resistance in this situation.

Falling scenario: sell here. Only if you are expecting oil above 60.00, you cannot short. The Russian market, and not only it, has little chance of growth. 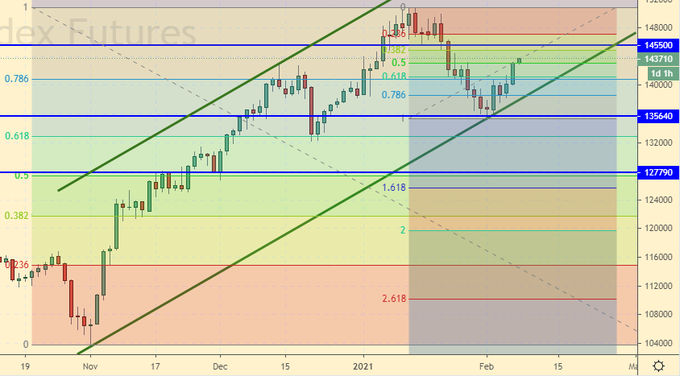