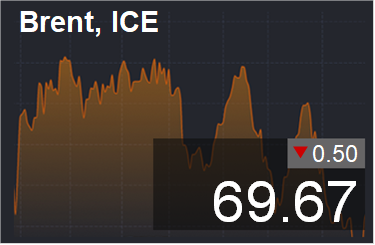 The oil rising in recent weeks can be attributed to several things:

the first is OPEC’s decision not to increase production;

the second is the attacks of the Yemeni rebels on the territory of Saudi Arabia, in particular on the objects of the oil infrastructure;

the third is a drop in prospects in the stock market, as a result of which free money is looking for other ideas for itself. It is very likely that we are at the end of the market cycle and the rise in commodity prices reflects this fact.

Injection by the Americans into the economy of 1.9 trillion. dollars, naturally through banks (400 billion will go directly to the population), only stimulated the next stage of buying raw materials, including oil, and gold, and silver.

If the US economy fails to recover from massive support measures, we will face a strong correction in the oil market. Note that while the unemployment rate is falling, and the overall picture for mid-March looks good.

Thanks to an increase in global feed consumption of 5.2 million tonnes in 2020/21, total wheat consumption this month is increased to nearly 776 million tonnes. Thus, carryover stocks from season to season will grow by a symbolic 0.8 million tons, which will obviously create nervousness in the market in the summer while waiting for the arrival of a new crop.

Intensive consumption of wheat in China for feed has sparked much of the surge in global consumption this month. After increasing the forecast for feed consumption in China by 5 million tons, the country will account for 19 percent of total world wheat consumption, compared with a 5-year average of 16.5 percent.

The central event of the next week is the US Federal Reserve meeting on the 17th. There is a feeling that the softer Powell speaks, the more traders will sort out US debt securities, in the expectation that the rate of return on them will begin to rise over the next few months.

At the moment, Powell’s soft rhetoric may give some impetus to the stock market, and it will seem that everything is fine, but there is a strong belief that the SP500 will not be able to pass above 4120 and from this point Armageddon will begin, which the bears have been waiting for three years, no less. On March 19, a meeting of the Central Bank of the Russian Federation will take place. Let’s see what the Central Bank will do, whether it notices inflation or not. It is possible that not, since preference will be given to stimulating the economy. Tightening the nuts, or raising the rate, will be delayed as long as possible. Against the backdrop of high oil, the ruble may try to go to the level of 70.00, which should contain the growth of prices for imported goods in the future.

The market continues to outflow speculators’ money to a greater extent precisely from purchases, which heightens fears about the fairness of the current growth. The market is getting thin.

Growth scenario: March futures, the expiration date is March 31. We continue to stubbornly wait for a rollback. Now, preferably by 56.00. It is extremely dangerous to enter long at current prices.

Falling scenario: we stick to our previous opinion — if prices arrive at 76.00 — sell. Short from the current levels is possible at the 1H. 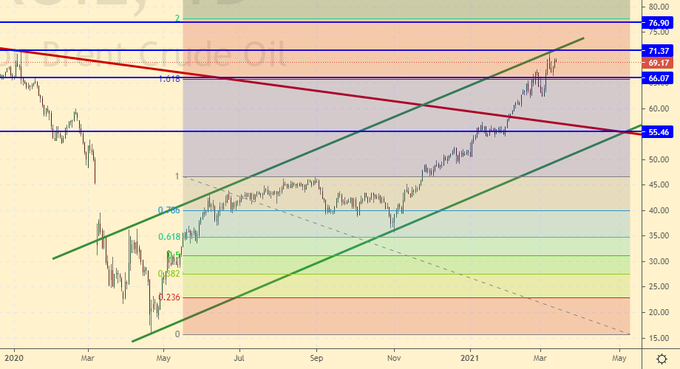 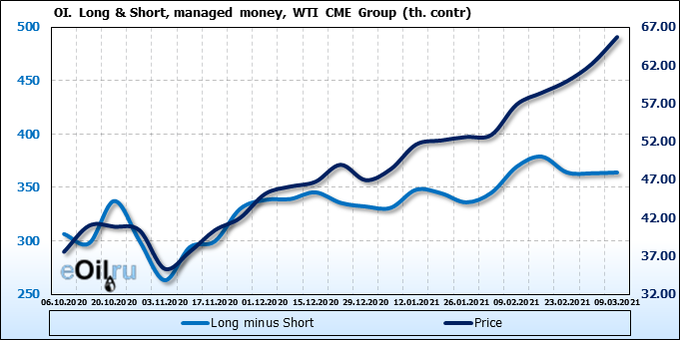 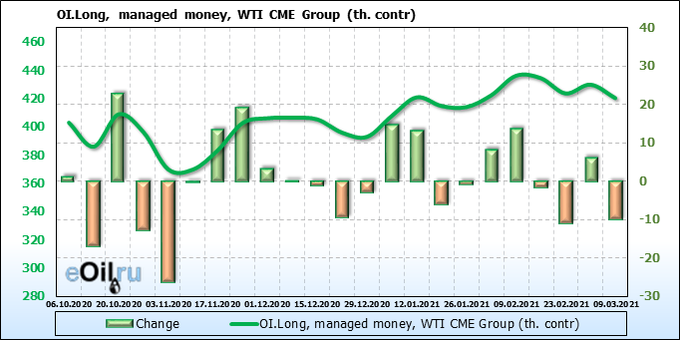 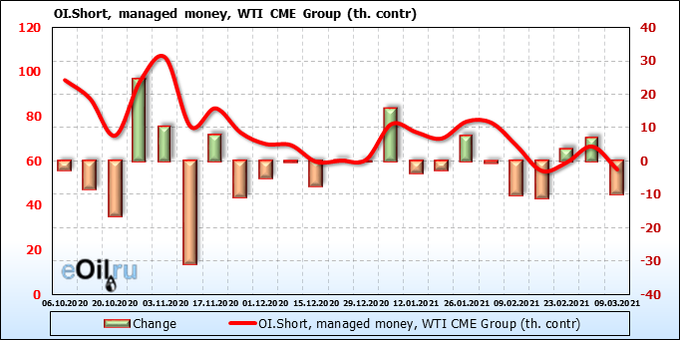 Growth scenario: April futures, expiration date March 22. We continue to be out of the market. We are waiting for a rollback.

Falling scenario: when we approach 72.00, we will sell again, this is the thought of last week, and so far there is no point in changing it to something else. 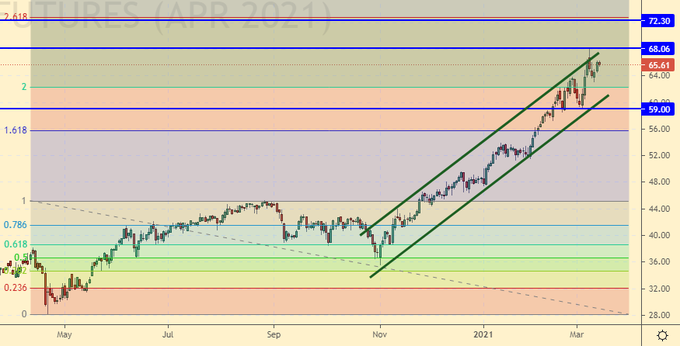 Growth scenario: April futures, the expiration date is April 12th. We are waiting for a rollback, not buying.

Falling scenario: when approaching 580.0, we will sell. The impulse is exhaled. 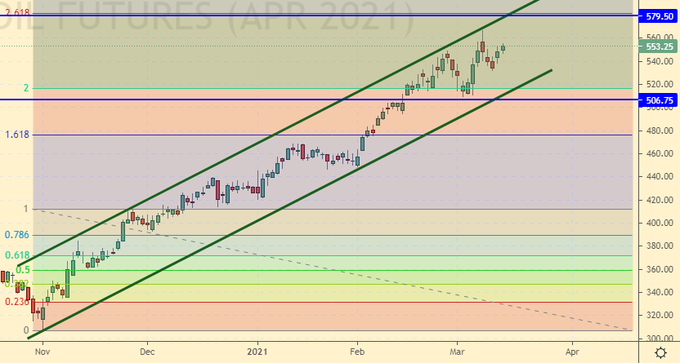 Falling scenario: do not sell. It doesn’t make any sense. 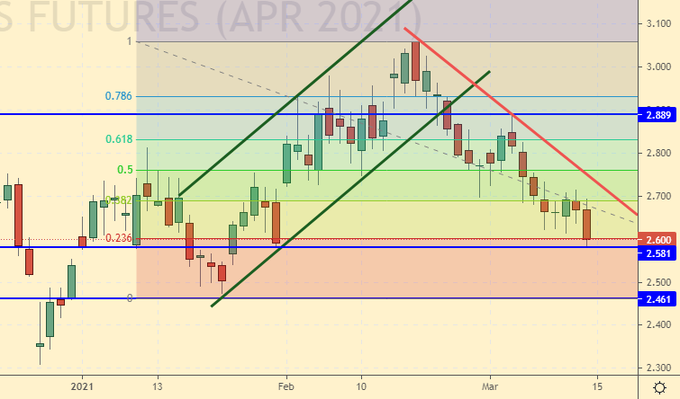 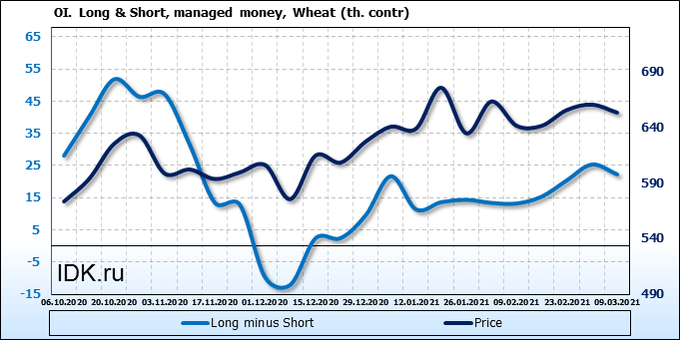 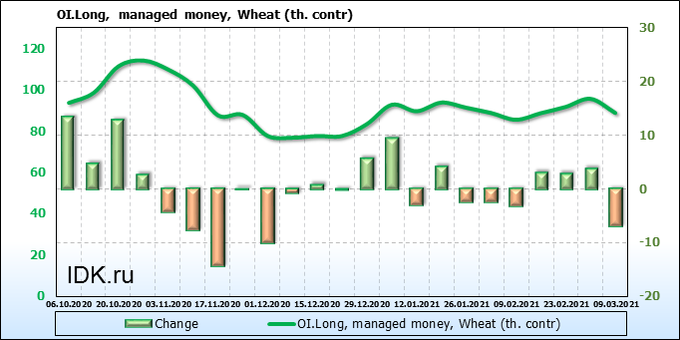 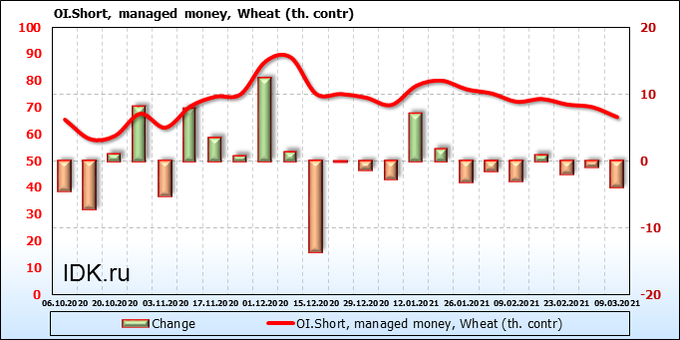 We see an outflow of speculators from both purchases and sales. We did not expect anything revolutionary from the spring months. Rather, until the end of April, the market will slowly go down with short rest stops.

Growth scenario: May futures, expiration date May 14. We are waiting for 600.0. Even better is 550.0. There we will think about entering the long. Since consumption is at a high level, by the end of August we may not see a pronounced minimum.

Falling scenario: sold last week, now we are waiting. The first major support is at 623.0. We will count on the fact that it will be broken and we will go at least to 600.0. 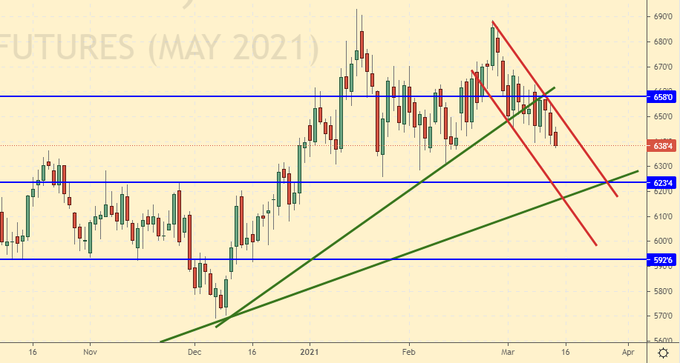 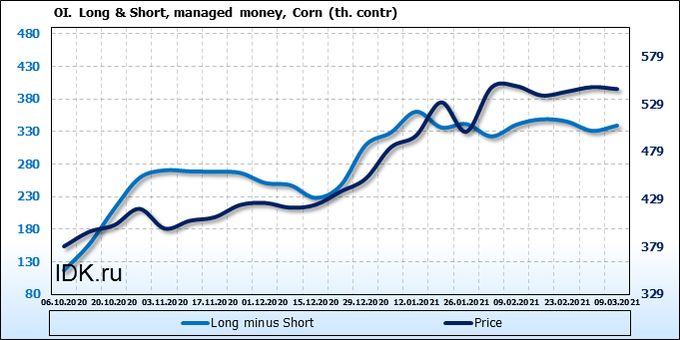 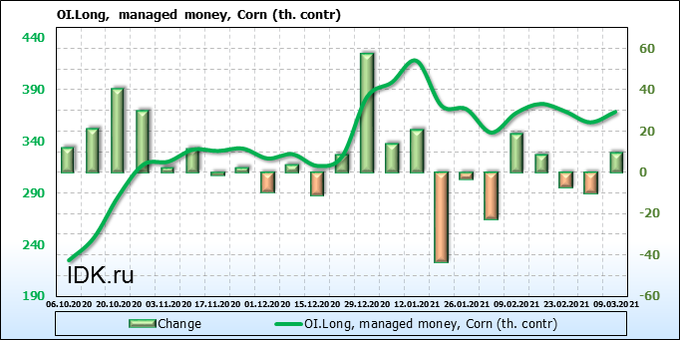 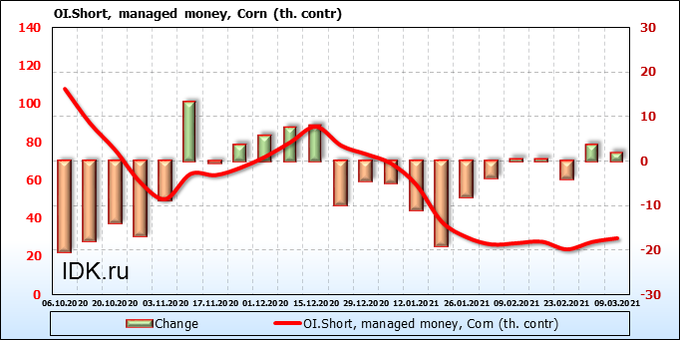 There is an increase in activity of both bulls and bears in the corn market. The direction that the market will choose next week can be considered true.

Growth scenario: May futures, expiration date May 14. We will continue to wait for acceptable levels for purchases. We do not enter the long.

Falling scenario: we continue to stand in shorts, counting on a pullback to at least 496.0. In case of falling below 523.0, you can slightly increase the position. 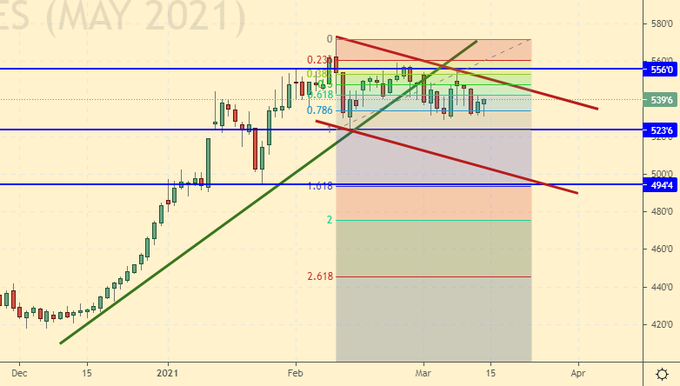 Growth scenario: May futures, expiration date May 14. Oilseed has the potential to enter 1700.0. Here you can buy, however, we put the stop almost close.

Falling scenario: we recommend selling. The last structure highlighted is the wedge. A fall in the area of 1300 is possible. 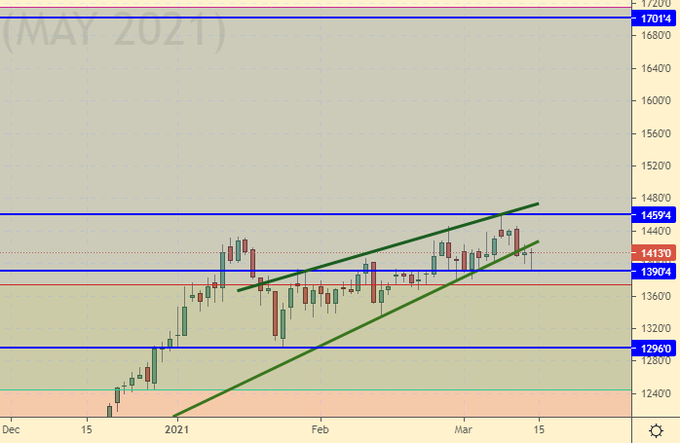 Growth scenario: May futures, the expiration date is April 30. We continue to count on the move to 18.20. Keep buying. We keep the positions opened earlier.

Falling scenario: the short from 18.20 continues to be the main idea. We are waiting for the arrival of prices to this level. 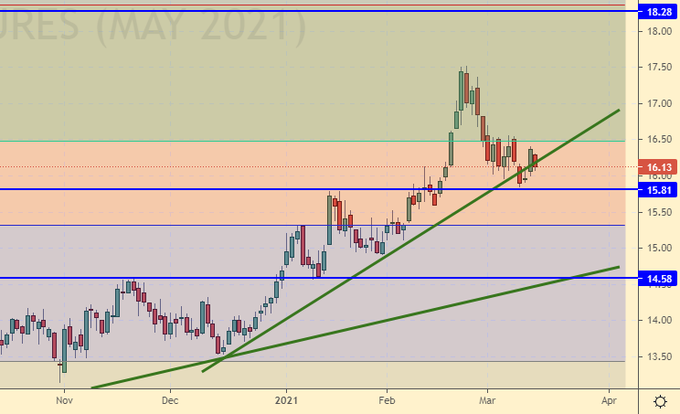 Growth scenario: May futures, the expiration date is May 18. We are still in a growing channel. The purchase of the beginning of the week turned out to be correct. Now we are waiting.

Falling scenario: we will hold off with sales. Let’s ask the market to go below 125.0, then we will think. 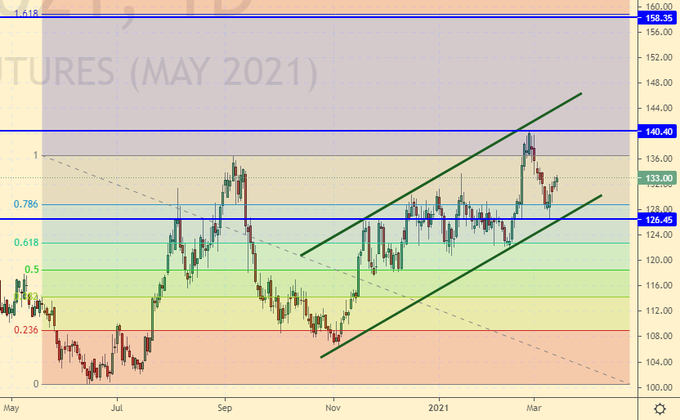 Growth scenario: if the market rises above 1750, you can buy. Most likely this will happen after the US Federal Reserve meeting on Wednesday.

Falling scenario: you can try to sell when approaching 1750 when signals for a downward reversal appear. Everything will be decided after the Fed meeting. 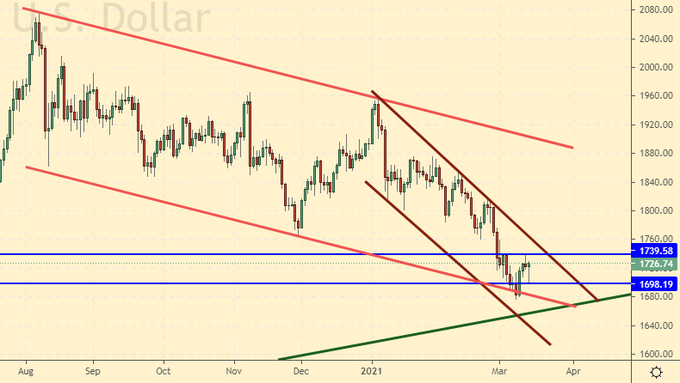 Growth scenario: we continue to wait for the arrival of prices at 1.1600, do not buy.

Falling scenario: keep holding the shorts. Whatever Powell says, the euro is likely to continue to fall. Europeans need to get vaccinated faster. Too long, too much liberalism. Add to shorts here. 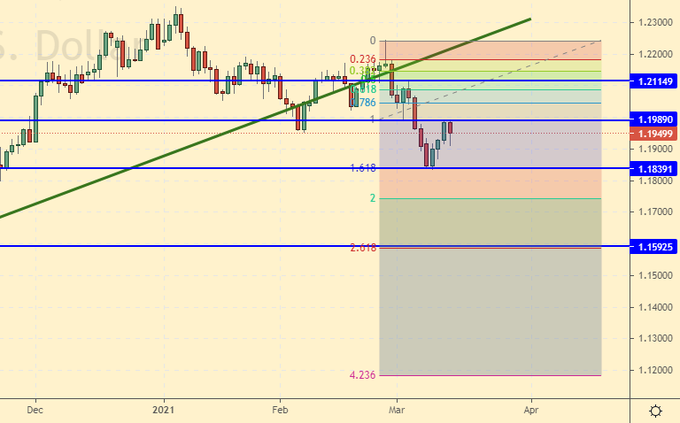 Growth scenario: we continue to believe that until the market reaches 75.10, there is no point in buying. It’s another matter if we quickly find ourselves at 68.00, we will have to think there. Oil is high. The ruble can bring a pleasant surprise to the citizens of Russia.

Falling scenario: keep short for now. If we go below 72.50, then 70.00 and 68.00 marks will open at the bottom. Strong moves are possible after the Fed meeting on Wednesday. 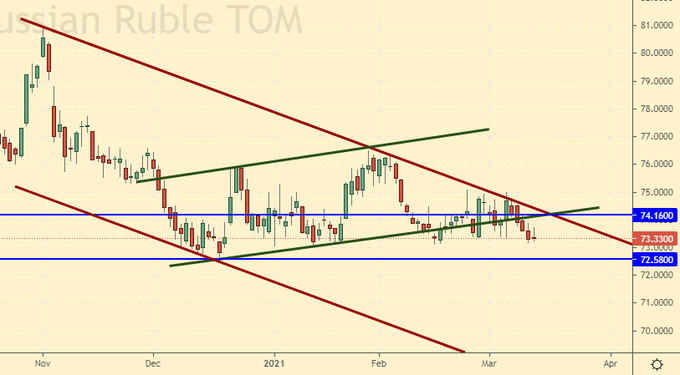 Growth scenario: March futures, the expiration date is March 18. Showed a new maximum. It is possible that on March 17, Powell will inspire the stock markets to new high feats, and some of the general virtual prosperity will fall on the Russian market. Let’s buy with the expectation of going up to 167,000.

Falling scenario: when approaching 167000, you can sell. The second option for a short is for the market to drop below 140,000. 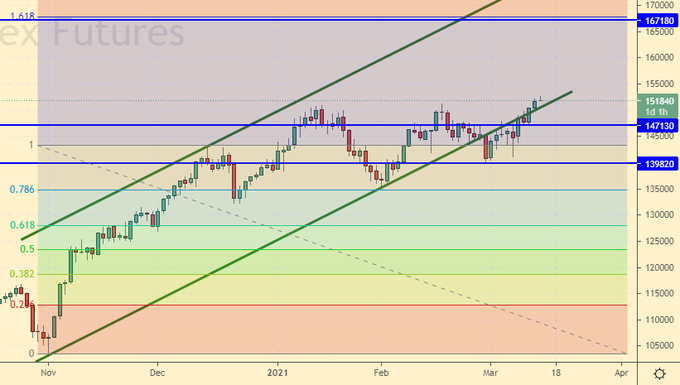